The history of Hotel Vic begins approx. 150 years back in time. At that time, Porsgrunn was divided in two sides by the river, with an east side and a west side. To get across the river you had to drive a boat or ferry or walk on the ice in cold winters. The bridge over the river was not completed until 1894.

The river was in many ways very important for Porsgrunn since shipping played a central role in the town’s business life. It connected the city to the near and far countryside and was a matter of course as the city’s port. There was always a bustling life with visits from boats from all over the world, loaded with goods to be exported and imported. The river laid the foundation for Porsgrunn to become an international city and it became an attractive place to live for Norway’s richest and finest families.

The river was not only an important lifeline for the city, but it also became a natural gathering point for the inhabitants. Class divisions were also clearly visible, with stately farms built by the city’s richest and most powerful families on the east side, and skipper’s houses with a more even social structure on the west.

For several generations, two of the country’s richest and most powerful families lived in the city. Where the town hall is today was the chamber manor that Nils Aall built. The farm was named after Chamberlain Severin Løvenskiold, who took over the farm after Nils Aall.

In 1838, the chamber manor went from being a social meeting place to becoming an administrative and political center in the city. This is because the municipality took over the farm and used it as its first town hall.

The story goes on to say that currently Porsgrunn was a stately town. Down the high street the large apartment buildings lay in a row. The large apartment buildings were named after their owners and were named accordingly. In storgata 131 was the Gasmann farm where there used to be a grocer’s shop and a distillery. The farm burned down in 1824 but was later bought and rebuilt by consul Jens Gasmann (B: 1776 D: 1850).

After Gasmann’s death, the farm was bought by A.S Eidanger Bad and was named Victoria Hotel, with hotel owner Halvdan B. Nilsen as host. From 1891, there was a full hotel operation on the farm, and then Nilsen took over the management in full until his death in 1907. His surviving wife took over the operation until the hotel was sold again to Hans Sønderskow, who was the owner until 1949.

After the war, Porsgrunn lacked a proper hotel for many years. The Central Hotel burned down in 1946 and the Grand Hotel was closed in 1950. The only remaining hotel in the city was then Victoria Hotel. With its 36 beds, it satisfied neither the needs of business nor tourist traffic. The city also lacked a suitable place for representation duties. But not least Porsgrunn needed a hotel for sailors, as Porsgrunn was the only accommodation for sailors between Tønsberg and Arendal.

It was then decided to invest money in the Victoria hotel because it was the city’s only accommodation. The hotel was out-of-date, old, and worn, and in order to continue operating it needed a proper upgrade.

In 1947, the cinema bought the Victoria hotel on behalf of the municipality for NOK 280,000, and the restoration job was started.

Also included in the purchase was a 5-metre plot of land between the old hotel and Odd Fellow, which was well suited for a new building. A joint-stock company was then founded to take care of the operation, while the cinema board, reinforced by city council representatives Carls P Wright and Thorvald Nielsen, was to work on the plans for a new hotel. The architect’s name was Bernhoft Evensen.

In 1952, the city council and Victoria Hotel agreed to turn to the public sector, to obtain sufficient capital to complete the building project. The town’s businesses supported the initiative and invested NOK 475,000. Porsgrunn Municipality contributed NOK 200,000 and the cinema NOK 530,000. It was decided that the municipality should not control more than 50% of the shares because the new hotel was to be the entire city’s hotel. To emphasize this, all residents of the town were invited by the newspaper PD to join a naming competition to give the new hotel a new name. The new name then became Hotel Vic, as it is called to this day.

The high-rise building for Hotel Vic was begun in February 1955 and completed on 16 December 1956. The hotel had then undergone a substantial renovation and appeared new and modern with 72 rooms and 100 beds. All rooms had a private bathroom with shower and wc or just wc. Cold and hot water was put in and a central oil boiler was installed. All rooms had telephones and radios installed and new furniture was purchased for rooms and common areas.

The hotel also got a long-awaited restaurant, a large dining room with room for 250 guests and a separate dance restaurant. A cafeteria, a hairdressing salon and a kiosk were established in the building. This was done to create a natural gathering point in the city for residents and visiting guests.

After the re-opening of Hotel Vic in 1956, a lot happened in a few years. In addition to rebuilding and renovation, for a period actor from various industries who wanted to try their hand moved in and out. In addition to the cafeteria, hair salon and kiosk, there has been a bowling alley, pub business, liquor store, bingo, travel agency and office rental here.

In the period from the mid-70s to the end of the 80s, large investments were again made in the hotel. Old Victoria hotels were converted into guest rooms and plenary rooms and group rooms were furnished in the liquor store’s old premises. The conservatories were expanded and After Eight Dancing started. In 1990, Trygve Hegnar buys shares in the hotel and the following year becomes the sole shareholder and owner of the hotel, as he is today.

Over the years, the hotel has gone through many change processes to meet today’s market and standards. The last major renovation processes the hotel went through was in 2018. Then the reception, the lounge and all the course rooms were refurbished. Investment was made in new furniture, 2 new shuffleboards and a big screen in our lounge. Our course rooms have received new, upgraded technical equipment and we have received a new training room with state-of-the-art equipment. In addition, all rooms have been given a facelift with new colors, textiles and furniture. Today, the hotel appears new and modern.

We at hotel Vic work every day to ensure that our guests feel comfortable in our homely hotel. Vic has a lot of soul and history in its walls and has been a natural gathering point in our city for over 100 years. We still want to be, and you are welcome to join us on that journey! 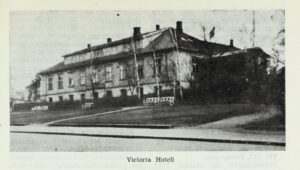